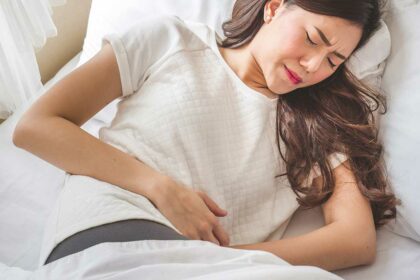 Hormonal changes associated with menstrual cycle may result in mild subjective symptoms in most women, but these will not influence lifestyle or activity. However, extensive complaints may occur in the time around period, which may even restrict normal life.

The quite variable syndrome occurring in the days prior to the period is named in summary premenstrual syndrome (PMS). The term premenstrual indicates the time point of symptoms: they are most pronounced in the time before period, and will decrease at the onste of bleeding.

It should be differentiated from painful period (dysmenorrhea) when there are no symptoms during the days prior to the period, however, the period is associated with intense lower abdominal pain and cramps. (Although it has to be noted that they have a common origin, i.e. changes of the hormonal background – relative estrogen overweight!) Inconvenient associated signs on the days prior to the period have been known for long, the term premenstrual syndrome (PMS) itself comes from Katharina Dalton MD.

What are the likely symptoms?

The symptoms of premenstrual syndrome are quite variable.

Physical symptoms include headache, dizziness, muscle and joint pain, and breast distension. Sleeplessness may also accour, just like sleepiness. Breast distension, swelling of the extremities, abdominal bloating and temporary weight gain may be associated with the effect of hormones produced in the second part of the cycle.

Psychic symptoms include irritability, tenseness, fatigue, depression. Emotional lability, groundless excessive emotional reactions are usual. In some women, premenstrual syndrome leads to barely noticeable mood change, in other cases the behaviour alters markedly, and sometimes these changes are really hardly tolerated by their environment, thus, premenstrual syndrome often becomes the origin of familiar or workplace conflicts. All this is true the other way round: in a not adequately functioning partnership the woman may “escape” into the symptoms of premenstrual syndrome.

Prior to applied therapy, determination of progesterone/estrogen rate and, depending on the result, further gynecological and endocrinological hormone evaluation is elemental. The time point of hormone evaluation depends on the cycle of the given person, and it will never be determined based on the reference range seen on the laboratory report, whether a hormone normal or abnormal is, we always have to look at their proportion and the influence upon each other.

You may receive information about these methods and application possibilities in person – based on previous appointment (+36 70/23 89 689).

This website uses cookies to improve your experience while you navigate through the website. Out of these, the cookies that are categorized as necessary are stored on your browser as they are essential for the working of basic functionalities of the website. We also use third-party cookies that help us analyze and understand how you use this website. These cookies will be stored in your browser only with your consent. You also have the option to opt-out of these cookies. But opting out of some of these cookies may affect your browsing experience.
Necessary Always Enabled

Any cookies that may not be particularly necessary for the website to function and is used specifically to collect user personal data via analytics, ads, other embedded contents are termed as non-necessary cookies. It is mandatory to procure user consent prior to running these cookies on your website.